These classic Australian lamingtons are perfect for Australia day or any other day you need a delicious morning or afternoon tea.

Lamingtons are the quintessential Australian dessert. A classic Aussie icon. They are made with a light, fluffy sponge cake, coated with chocolate icing and finally finely grated coconut.

Lamingtons are believed to be named after Lord Lamington, who was the governor of the Australian state of Queensland between 1896-1901. It is thought there were invented by one of Lamington's staff as a way of using up leftover sponge cake, the chocolate coating and coconut making the slightly stale cake nicer to eat or possibly to serve to unexpected visitors.

Lamingtons were invented by one of Lord Lamingtons' staff members in the late 1800s. The recipe for Lamingtons was published in 1902 in the Queensland Country Life newspaper.

In 2014 The Guardian published an April Fools Day article, claiming there was historical evidence there were in fact invented in New Zealand and citing a painting with the alleged cake, which later turns out never really existed. The joke worked a little too well and was even cited in several locations before later turning out to be a joke.

When is Lamington day?

National Lamington Day is celebrated in Australia on 21st July each day, giving us all an extra excuse to indulge in this tasty Aussie dessert.

Do Lamingtons have jam?

Can't get enough of this delicious Aussie dessert? You'll love my fairy bread lamingtons. Perfect for Australia Day or any day you need some sunshine and sprinkles in your life!

Corn flour: also known as corn starch and can be labelled as wheaten cornflour or corn (maize). The cornflour makes the cake crumb softer and makes for a lighter sponge cake.

White sugar: white sugar is best in this recipe. You could use castor sugar if you prefer. I don't recommend using other types of sugar, they will be hard to dissolve and will compete with the flavours in this ice cream.

Eggs: I use large eggs in this recipe, approx. 55 gms each with shells before cracking. Your egg should be at room temperature before you start baking. Usually leaving the eggs on the countertop for thirty minutes before baking is sufficient.

Butter: I used regular salted butter in this recipe but you can use unsalted if you prefer. It's important your butter is a room temperature before you start baking so your batter comes together and your cake rises. It can take anywhere from thirty minutes to one hour for the butter on the countertop to come to room temperature.

Milk: I use full cream milk in pretty much all my recipes because it tastes better. In this recipe you could use reduced fat if you prefer.

Cocoa powder: I use natural cocoa powder in this recipe. It takes a bit more effort to mix in but gives the best chocolaty flavor.

How to make lamingtons

Grease and line a slice tin or square cake tin. Lamingtons are usually made in a 9" x 12" slice pan, however I find they work just as well in a square cake tin which gives them extra height.

Sift your flour and cornflour together three times to aerate the flour and help make your sponge cake nice and fluffy.

Add the butter, sugar and vanilla essence to a mixing bow. Mix together with electric hand beaters or in a stand mixer. Add the eggs, one at a time, mixing well in between each addition.

If you are using a stand mixer at this point I recommend switching to hand mixing from here.

Add half the flour and cornflour mix and gently fold in using a spatula or spoon. To fold run the spatula around the end of the mix, then drag it through the middle, turning the spatula over as you pull through. Repeat, in roughly figure of eight motions in the batter, scooping round the edge and folding through the middle until the flour is mixed in, in a slow and steady motion.

Scrap the batter into the prepared cake tin and smooth it down around the edges. Bake for 30 minutes or until the cake is cooked through, is golden brown on top. The cake springs back when lightly pressed and a skewer inserted into the center to come out clean and not covered in sticky batter.

Allow the cake to cool completely. Remove from the pan, then trim the smooth cooked edges to expose the rough cake surface underneath. Using a large serrated knife cut the cake into large squares. If you want perfect squares you can use a ruler if you really want, but I prefer to just eyeball it.

Return the cake pieces to the cake tin and freeze for one hour before coating. Some recipes say to make the cake the day before to make it easier to coat. You can do this, but also means you end up eating day-old cake. Freezing the cake is quicker, and makes it less crumbly and easier to coat in chocolate.

Reduce heat to low and stir icing until mix becomes thick and coats the back of a spoon or spatula, leaving a line in the mix when you run your finger through it.

Remove from heat and set up your assembly area with the frozen cake on the left, chocolate icing in the double boiler, shallow cake tin with desiccated coconut and a cooling rack on top of a baking tray to catch the drips of coconut.

One at a time drop each piece of cake into the chocolate icing, using a fork to flip it over and make sure it's well coated. Lift the cake out of the icing with the fork, holding it above the icing and allowing the extra to drip off well.

Put the cake carefully into the tray of coconut. Using Different forks, roll the cake around in the coconut ensuring it's well coated. You can also pile the coconut up around the sides and top the cake and gently pat it down to help the coconut stick. Transfer the coated cake to the cooling rack and repeat until all slices are done.

If you are making plan lamingtons you can stop here. If you want to make filled lamingtons, cut them in half, spread one side with jam and add whipped cream, then put the other side on top.

To serve put the kettle on to make a cuppa, put the lamingtons, either filled or unfilled on to a plate and enjoy!

How long can you keep Lamingtons?

These lamingtons are best eaten on the day they are made but will store in an airtight container at room temperature for up to three days.

Do you refrigerate Lamingtons?

If you have added jam and cream then any leftover cakes will need to be refrigerated in a covered container in the fridge. 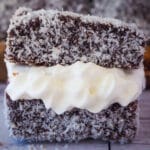 To assemble the lamingtons