This classic New Zealand ginger crunch full of sweet ginger flavor. This version is a update on Edmonds Cook Book classic for the modern home cook.

The Edmonds Cookery book has been a staple of Kiwi home cooks for over a hundred years. Ginger crunch first appears in the Edmonds cook book around the 1950's and has been a firm favorite by Kiwi's ever since.

Some would say the original Edmonds recipe is perfect as it is, but in consultation with my resident taste tester, my husband, a kiwi born and bred who grew up in Palmy, I have made a few updates.

I love the recipes, but the instructions can be a little thin. So I've done my best to improve on this classic in the following ways:

Gram measurements: I've included gram measurements as well as cups. For any kind of baking I highly recommend getting a pair of cheap digital scales and measuring by weight. Cup measures can vary widely within countries, let alone between them and this can have a huge effect on the success of your baking.

More icing: I've doubled the icing in this recipe. According to Edmonds 'the classic recipe for a crisp, crunch slice is thinly iced. You could double the icing if you like a thicker layer, but thin in best'. Personally I like the extra icing, and is certainly makes for a prettier slice. But if you like your crunch old school you could half the amount of icing listed here.

Don't pre cut: Some recipes also say to score or cut the base while the icing is still wet. In my experience this just leads to a messy looking slice and is not needed. Best to let the whole thing set, then cut with a large, sharp knife.

Reduce the tin size: Edmonds calls for a 20 x 30cm tin, also known as a slice tin. I found a tin this size is to big and ends up with a really thin slice. A 20 x 20cm tin works much better.

Choose your size: Finally square pieces make for a pretty slice, but you could cut them into smaller rectangles if you prefer, which always give you the excuse to have a second piece!

Ground ginger: gives the ginger to this ginger slice. I like to really taste the ginger in my ginger crunch, so I've added extra in this recipe. If you don't like as strong a ginger taste you can reduce the amount of ground ginger in both the base and the icing.

Plain flour: also known as all purpose flour. The slice is not meant to puff up very much so don't be tempted to use self raising flour.

Baking powder: is used to help keep the base light and crunchy. This is not the same as baking soda and you can not substitute one for another.

White sugar: white sugar is best in this recipe. You could use castor sugar if you prefer. I don't recommend using other types of sugar, they will be hard to dissolve and will compete with the ginger flavor.

Butter: regular salted butter is fine in this recipe, but make sure it's at room temperature before you start baking. You could also use dairy-free marge if you prefer.

Golden syrup: also known as light treacle, adds to the caramel flavor of this recipe without competing with the ginger flavor. You could try substituting with maple syrup but I haven't tested in with this and you will have to watch your icing to make sure it sets.

Icing sugar: also known as powdered sugar. You need the fine sugar to dissolve properly in the icing. At a pinch you could try blending regular white sugar into powdered sugar with a powerful blender, although I haven't tried this.

How to make ginger crunch

Make sure your butter is a room temperature. This could take any where from thirty minutes to one hour once taken out of the fridge, depending on where you live.

Grease and line your cake tine with butter and baking paper. You can use a slice tin or a square tin as is your preference.

Add the flour, sugar, baking powder and ginger for the base to a mixing bowl and mix well.

Tip base into the prepared baking tin and press down lightly until it is flat and relatively even. Bake for about 25 mins or until base is starts to become golden around the edges.

Remove from oven but leave in the tin. While the base is cooling make the icing.

Sift the icing sugar. Add the golden syrup, cutter, ground ginger and icing sugar to a small pot. Heat on low, stirring until the butter is melted and its well combined. Its important to give the icing a really good stir to make sure the butter is well mixed in, or it will separate and you will end up with an oil slice.

Pour the icing over the base and smooth out. Transfer to fridge for an hour to set.

Remove from fridge and use a large sharp knife to cut into squares.

To serve put on the kettle for a cuppa, put the crunch on to a plate an enjoy!

This slice will store well in an airtight container lined with baking paper for up to a week. After that the base may start to go a little soft, but they should still be good to eat for at least another week. 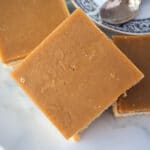