These fresh feijoa muffins are a light and easy way to use feijoas. They are delicious warm from the oven and freeze well for a year round treat.

This feijoa muffins are a fresh and easy way to use feijoas during feijoa season. With a dash of lime to boost the natural tang of the feijoas and brown sugar for caramel notes.

To really add to the feijoa flavor in these muffins I thrown in a couple of whole pureed feijoas, in addition to the scooped out flesh. Feijoa skin in edible and is where a lot of the flavor and perfume is. In fact once you've scooped out the flesh the feijoa skins can be used to make tasty drinks such as feijoa fizz or feijoa syrup (recipes coming soon!). Feijoa skins are edible but can be on the bitter side. Once mixed into these muffins you get all the flavor without the bitterness. If you just can't face the feijoa skin you can scoop out the feijoas and use some extra flesh instead.

Either way these muffins are a tasty and delicious way to use a bunch feijoas during the season. Still got heaps of feijoas left? Check out my full collection of feijoa recipes including everything from feijoa chutney to feijoa loaf cake.

Not sure what to do with all those left over feijoa skins? Try making my feijoa syrup or fun feijoa fizz. And if you've just completely had enough of feijoas could you try making my easy pear muffins instead. Another great option to use Autumn (Fall) fruit 🙂

Feijoas: in New Zealand during feijoa season they are of course readily available from shops, road side stalls and neighbors, assuming you don't have your own tree groaning with fruit. In Australia there are a couple of farms that ship interstate or you maybe able to find someone local you with trees on local buy sell swap groups.

Self raising flour: white self raising flour is best for this recipe, I haven't tried it with whole meal flour. You could also you all purpose flour mixed with baking powder if you prefer to make your own.

Brown sugar: also known as light brown sugar, adds to the caramel notes of this recipe. You could use white sugar if you prefer, or experiment with dark brown sugar.

Vegetable oil: adds some much needed fats to these muffins. You can try substituting with similar oils such a peanut or canola.

Eggs: I use large eggs in this recipe, approx. 55 gms each with shells before cracking.

Limes: a little lime juice and lime zest helps brighten up the flavor of these muffins and complements the feijoa flavor beautifully.

How to make feijoa muffins

Add the brown sugar to the flour and mix well. Cut the feijoas in half length ways and scoop out the flesh. You will need about 1 cup of tightly packed feijoa flesh or 200gms. Add to a bowl and mash lightly with a fork.

Hot tip: For an extra punch of feijoa flavor I like to take an additional two feijoas, top and tail them and slice them up whole. Blitz well, until you have about half a cup of whole feijoa puree. The feijoa skin contains a lot of perfume and flavor and really boosts the feijoa flavor in these muffins. The skins are editable but can be somewhat bitter, but you don't notice this in these muffins. If you really can't face the skins you can scoop out an add half an extra cup of the flesh instead.

Add the wet mashed feijoa mix to the dry ingredients. Mix until just combined, do no over work the batter or you will end up with dense chewy muffins.

Quickly spoon into the muffin tins and bake for twenty five minutes, or until golden brown.

Remove from the oven and eat while still warm or allow to cool.

These fabulous fruit muffins are great served warm straight from the oven.

These muffins will store well in an airtight container for up to three days.

You can also freeze these muffins by wrapping individually in cling film and freezing for up to two months. 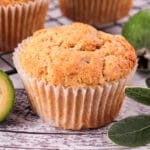