This feijoa fizz is a simple way use left over feijoa skins to get maximum flavor from them. A quick homebrew that makes a delicious fizzy alcoholic drink.

What do you do when its feijoa season, you've been baking up a storm, perhaps a batch of feijoa muffins or feijoa loaf, but have heaps of feijoa skins left over? You could try making my feijoa syrup or for something fun and delicious this easy alcoholic feijoa fizz.

When I first tried making this homemade soda I was skeptical. How could feijoa skins with a little sugar produce a tasty and fizzy drink without manually carbonating it? It is really that easy to make what is essentially a mild feijoa cider at home, with hardly any equipment? Yes, yes it is.

Of course if you're not confident in natural yeast in your feijoa skins you can also add the tiniest amount of champagne or wine yeast which will ensure you're fizz is extra fizzy and boost the alcohol content.

This feijoa fizz is basically a quick homebrew, similar to a ginger beer or cider. Its brewed over two stages, the initial fermentation with the skins, then strained off and bottled for a second fermentation.

It will contain at least some alcohol so this feijoa drink is not suitable for children. The exact amount of alcohol in the final product with depend on a number of things, the sweetness of the feijoas, how much natural yeast they have on them, the amount of sugar you add, if you add extra yeast and the temperature of the initial and second fermentation. All of this means it can be really hard to tell exactly how much alcohol is in your final fizz. Its likely to be about 2 - 3% but could be as little as .5% or as much as 8%. If you wanted to find out exactly you can check this relatively easily using a hydrometer or refractometer.

For maximum safety do not give this fizz to children and always assume it could contain a reasonable amount of alcohol and therefore treat it will the same level of caution you would with any other alcoholic drink.

Looking for more tasty feijoa recipes? Check out my full collection of feijoa recipes including everything from chutney and muffins to crumble and cake.

Feijoa skins: this recipe uses feijoa skins that have already had the flesh scooped out of them. I used about three tightly packed cups of skins, or 750gms. If you don't have enough left over skins from another recipe you can half the recipe, or freeze the skins and top them up until you have enough.

Sugar: a little white sugar helps feed the yeast in skins and boosts the fermenting process.

Water: an essential ingredient to make this syrup. Regular tap water is fine, provided it drinkable where you are.

Wine or champagne yeast (optional): a little champange or wine yeast will enhance the natural bubbles of this fizz and help boost the natural yeasts in the skins. You can leave it out if you prefer.

How to make feijoa fizz

First check to make sure there are no moldy or bad bits on your feijoa skins. Cut off and discard these. There is no need to remove the flower tip. Do Not wash the skins as you will wash off the wild yeast you need to ferment the fizz.

Put in your feijoa skins into a container that's large enough to fit all the feijoa skins covered in water. Try to pack them in a bit so they stay together. Sprinkle over the sugar and top up with water until all the feijoa skins are submerged. Some of the feijoa skins may start to float so its important to weight them down with something. This can be as simple as a glass, plate or bowl but must be properly clean and dry before using.

Cover the container loosely with cling film or a tea towel and leave in a cool, dry place for three to five days.

Its important to watch your fermenting feijoa skins carefully. If some of the skins float to the top you will need to try and submerge them again.

Hot tip: you will need to watch your fermenting skins carefully. If they start showing any signs of mold you will need to discard the lot and start again. The main reason the skins can go bad is if some of the feijoa skins have floated up and are poking out of the water at the top, so try to make sure they are all well submerged and weighted down.

The mix will start to go cloudy when its done and may start to bubble. This is the natural fermentation and fizziness starting. If the water is still looking very clear you can leave it for a further one to three days. Once the skins have done their first fermentation, strain the liquid into a large bowl or container and discard the skins.

Mix in the extra sugar and the wine yeast if using. Pour into pressure proof bottles. This is easiest with a funnel or you can use a jug with a spout and pour carefully. You can get proper pressure rated brewing bottles like I have used here but you can also you a clean soft drink bottle.

Put the lid own firmly and tut the bottles into a cool, dry place for another two to three days. The bottle should be visibly starting to bubble around the edge of the liquid. You can chill it in the fridge at this point if you like or serve at room temperature.

Carefully remove the lid, being mindful of the fact a considerable amount of pressure may have built up. If your fizz is looking particularly bubbly I recommend using gloves, covering the lid with a tea towel and opening carefully over the sink or a large bowl. You may need to crack the lid a little to release the pressure, then hold mostly it closed while its bubbling to release the pressure without letting all your fizz bubble out.

Pour into glasses, trying to avoid the last bit of sediment at the bottom and drink immediately for maximum fix.

If you leave the fizz in the bottles after the second fermentation it will continue to ferment and become more alcoholic. If not drinking immediately I recommend storing in the fridge for up to two days. Beyond this I find its not drinkable straight away and will need to be aged to make it nicer to drink again, which is a whole different ball game and more akin to making traditional cider. 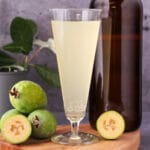