These cheesymite scrolls are a classic savoury Aussie treat. With just five ingredients they are perfect for lunch boxes, morning or afternoon tea.

Ah vegemite. A classic Australian flavour that you either love or hate, and most Aussies love it. Many of us grew up eating hot buttered toast with vegemite lightly spread over the top. I have only ever met a handful of non-Australian's who like vegemite, my husband included. The mistake most non-Australian's make when eating vegemite is to layer it on too thick. It's very strong stuff and you only need a light spread, best with lashings of butter on fresh, soft white bread.

These vegemite scrolls are another fabulous way to eat vegemite. Combined with melted cheese these scrolls have just five ingredients and are on the table in just 30mins. My kids gobble them up and they are perfect for lunches, lunches and snacks.

Cheesymite scrolls were invented in 1994 by Roger Gillespie, the co-founded Bakers Delight. They have since become an Aussie icon and can be found in bakeries, supermarkets and baked in homes throughout Australia.

Looking for more great kids' lunch ideas? Why not try making my kids charcuterie board or portable lunch-friendly banana pikelets. Perfect to feed your hungry tribe on the go!

Vegemite: an Aussie classic with a distinct strong salty savoury flavour. If you can't get vegemite you can use marmite which is similar.

Cheese: plain old grated tasty cheese is fine for this recipe. If you grate your own it will taste better but if I'm on the go chasing the kids I often make it with package grated cheese and it works just fine!

White Self raising flour: white self-raising flour is best for this recipe. You could also use all-purpose flour mixed with baking powder if you prefer to make your own. The ratio is usually two teaspoons of baking powder to one cup of plain flour, but check the instructions on your baking powder.

Greek yogurt: adds fats and thickens up the simple dough in this recipe. You can't replace this with natural yogurt as it won't be thick enough. For a dairy-free version you could try coconut yogurt, but I haven't tried it with this variant.

How to make Cheesymite Scrolls

Preheat the oven to 180°C/350°F/160°C fan-forced. Line a large baking tray with baking paper. Grate the cheese if not using pre-grated.

Add the white and wholemeal self-raising flour to a bowl and mix well.

Hot tip: my kids are not usually a fan of wholemeal but they gobbled up these scrolls without even realising they are a bit more healthy. If you kids Really aren't a fan, you could replace half, or all the wholemeal self-raising flour with white self-raising flour.

Add the Greek yogurt and mix well. You will need to switch to using your hands at some point and roll the dough around the bowl until all the flour is mixed in.

Lightly dust the bench with flour. Start to roll out the dough into a rectangle. Pick up the dough, flip it over and flour the bench again. This will help stop the dough sticking to the bench.

Using a rolling pin roll the dough into a rectangle approximately thirty cm by fifteen cm. Put the vegemite onto a microwave-proof plate and microwave it for five to ten seconds to soften it up a little bit. Do Not over microwave the vegemite, it smells horrible!

Spread the dough with vegemite to the edges and sprinkle it with three-quarters of a cup of cheese. Roll the dough up from the long edge until you have a long log shape. Cut the log into about eight pieces. This is easiest to do by cutting in half, then each piece in half again. Put the pieces onto the baking paper, scroll side up.

Sprinkle with remaining cheese and bake in the oven for about 18 - 20 minutes or until the cheese is melted and scrolls are golden brown.

To serve pop onto a plate and enjoy! Perfect for lunch boxes or a savoury morning or afternoon tea. Delicious!

How do you store Vegemite scrolls?

These vegemite scrolls are best served on the day they are made for maximum freshness. They will keep in a covered container at room temperature for up to three days but may start to go a little dry over time.

They can also be frozen once completely cooled on the day they are made in an airtight container in the freezer, for up to three months. 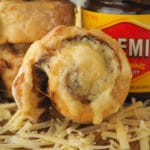